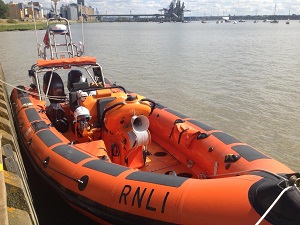 We are proud of our association with the RNLI This annual race celebrates the RNLI and raises funds for a service we all rely on to be there when we need it. An entry fee is applicable

Not enough wind, too many shipping movements, and, for the slower boats, too much tide. Just another day of racing at TYC!

After 2 failed attempts, conditions were benign enough to start this year's RNLI race, and considering how late we are in the season a good  sized fleet of 6 boats signed up and set out.

Souffle played the blushing bride and turned up late to the start. The rest of the boats go off to a flyer, with carnage ensuing at the first mark as Blue Victa and High Spirits got so close they tangoed together. This levelled gthe field somewhat and the fleet kept it close up past Broadness against the last of the ebb. Everyone seemed to pick their own course up to St Clements, Fleur de Leigh heading for the Essex shore, the rest staying Kent side. Suffice to say that this was the point that ships started to appear. Fleur de Leigh was able to stay out of the way, while the rest were forced to sacrifice their best angles.

Blue Victa decided to have a little play in the putty on the way back towards White Hart - fortunately they were able to extricate themselves without too much bother.

However by this time the tide was getting stronger and the wind was starting to fail, making the final White Hart mark a test of endurance. Souffle showed her design pedigree by moving up through the field despite her delayed departure. Helix and Hinemoa got caught out pushing tide with the breeze right on the nose. Helix stuck at it and managed to finish the race. Hinemoa threw in the towel. Still at least they got their moneys worth for their donation to the RNLI!