This trophy was established in honour of Kay Lucas, wife of long standing member Derek Lucas. This is a fundraising race and entry fees are donated to Cancer Research UK. The race is open to non-member yachts.

Entry fee: Minimum £5 per boat and £1 per crew (enter on the day - fee payable at briefing).

it was a good turn out for our annual Cancer Research charity race, with 9 boats entering and paying their entry donations.  Blustery conditions had some skippers getting their reefs in early, and some electing to go out under full canvas. The race had been timed around the high tide, and the course was set accordingly.

All boats made it to the starting area in good time, all boats showing good speed with the wind behind them against the flood tide as they exercised and manoeuvred around the tug buoys. There was a fast reach to the start line. Carioca was too eager, possibly a result of it being her first outing of the year, and crossed the line a second or so early.

The first beat up to Stoneness was glorious and gruelling with the tide still favourable, but kicking up a bit of a chop against the wind. It was a great opportunity for novice crew members to get their hand in, although one skipper admitted to wondering why he wasn't making much progress until he realised he had let a motor boater take the helm - or that is his excuse!

Freedom and Fleur de Leigh stretched their legs in front, with the remainder of the fleet jockeying for position. Linnet and Soufflee made it to the mark next. Carioca recovered from her poor start to fight back to the middle of the fleet. Southern Knight, Northern Star, Midas Touch and Solvik were all still in it at this stage.

Having the wind right on the nose slowed things down enough that he race officer shortened the course which had originally included a loop around White Hart, and Broadness.

The tide changed as the first boats were running down to Black Shelf, and the advantage started to move towards the faster boats. The beat back up to St Clements sifted the fleet. Freedom was well in front at his stage, but  Fleur de Leigh, Linnet and Soufflee all made it around the mark before the tide caused too many problems. The rest of the fleet were not so lucky. Carioca made it to the mark although was hampered by two ships coming through at the wrong time. However with the wind on the nose, by this time boats were having to go all the way up to Stoneness to be able to crab across to the next mark.

Back at the front of the fleet there was a fast run into the finish. At the rear, retirements ensued with Midas Touch, Solvik, Southern Knight and Northern Star all calling it a day. However it was a great days sailing and nothing really embarrassing happened, although one skipper needs to remember he is meant to stay out of the way of the big ships.

The adjusted times for the next 3 boats make interesting reading.  Well done for keeping it tight.

And more importantly, at last count over £550 was raised for Cancer Research UK - well done TYC! 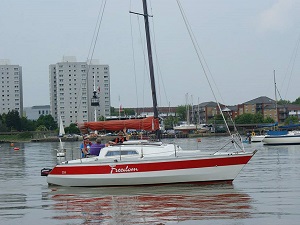