Our first trophy race of the season was a day where small decisions had big consequences. Light fluky winds  from the North East and a mid flood tide made this a fascinating tactical contest, and a real test of patience (if not endurance) for the crews.

Linnet made the best of the start, making the the first mark in a single beat. Hinemoa was making good progress but a tactical decision to stay out in the tide where there was slightly stronger wind backfired when the wind did not quite blow in the right direction, forcing her to take a tack and give up her second place to Midas Touch. Kilifi was in her first outing and her crew were clearly getting to know her and was fourth around the mark.

The down wind leg to St Clements was more of  a drift with Linnet stretching her lead, whilst Hinemoa just about redeemed herself and rounded the mark just ahead of Midas Touch, having managed a slightly more direct angle to the mark. Kilifi was not quite making the pace and they retired before rounding the mark.

The beat back to St Clements was where the hard work really began. True to the forecast, the wind was gradually backing to the east. The fleet held a line close to the Kent coast to avoid the worst effects of the flood tide. Linnet managed to make it across the fairway before the wind completely died. Midas Touch got in front of Hinemoa again, but both boats were becalmed on the Kent side  with insufficient wind to push them across the tide. At this stage the entire fleet was sailing backwards! Hinemoa decided to sail as far down stream close to the shore as she could before tackling the tide, and crossing to the Home straight

Linnet persevered with a tacking challenge and ultimately crossed the line for line honours well ahead of the rest of the fleet. Hinemoa's decision to take the long route paid off and she eventually managed to round the Black Shelf mark ahead of Midas Touch.

And then all of a sudden the wind appeared, giving both boats a final boost to the finish line - better late than never! 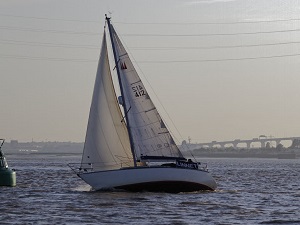