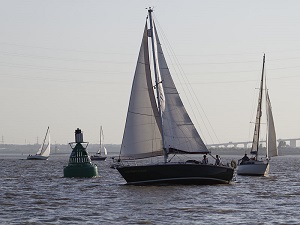 Four boats showed up for our first Saturday trophy race of the season.

The winds were light and right on the nose, so the race officer decided to start the race early to give the fleet time to make the Ovens buoy which was the original mark.

It was a long beat up the Gravesend Reach, and the race was shortened to go around the Tilbury South Cardinal. Fleur de Leigh was first around, but then she was the only A class boat in the race.

Hinemoa led Helix to the mark but temporarily fell behind at the rounding - although order was restored on the downwind leg.  There was just enough wind to keep the boats moving, and the calm conditions enhanced the spectacle (and sound) of a Spitfire flying over the fleet as they came past Tilbury lock.

Midas Touch kept touch and made up some time on the run in to the finish line, but ultimately it was Helix who took the prize. 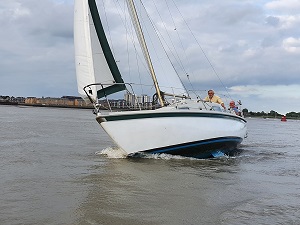