The Mayors Cup is raced each year on the nearest Saturday to May the 1st. It was originally established for young racers aged under 20, but in 1991 the format changed to focus on cruisers of all ages.

This years Mayo's cup  had a slightly different twist. We staged the race as part of the T100 festival, so after an early briefing the fleet formed up for a sail past of Grays Beach where, against a wall of sound from the Kinetika Bloco group, a crowd of onlookers cheered and waved flags. Our crews responded waving flags provided specially for the occasion by the festival. It looked and sounded great!

Preparations for the race were ominous with a strong westerly threatening to put the sailors to the test. However almost exactly on the 5 minute gun, it dropped to a pleasant F3, catching the entire fleet out, all having wandered down tide in preparation for a storming run into the start line.

The race was straight forward "stadium course" around the cans to provide maximum viewing opportunity for the festival goers.

High Spirits stormed around in under an hour and took line honours along with overall victory on corrected time.

Second place went to Midas Touch, who did have special guest crew in the form of one Mr Smith aboard, although we are all convinced it was the tactical nous of Capt Pugwash and Lucy Lobster that really made the difference! 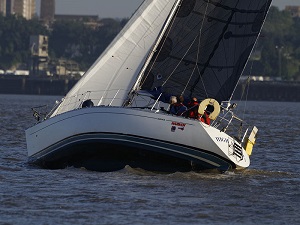