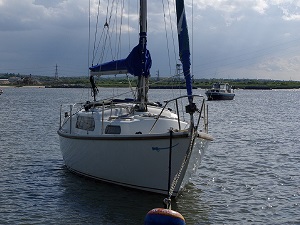 Well, it was never planned to happen in this way. A fairly straightforward jaunt around the pleasures of the Swale on the May Day Bank Holiday weekend turned into something of an epic with some drama thrown in just to add to the fun.

Denis and I were anchored on board “Us Two” (a Sabre 27 for the detail fans) in Stangate Creek having survived a slightly hairy ride down from TYC on the Saturday afternoon that had the four-seasons-in –one-day weather pattern (hail, no wind, sun, torrential rain, gale-type blasts etc). We mulled over a few options on the Sunday morning; the wind had dropped, thankfully (although I was less thankful later in the day), the tide had started to come in and we couldn’t get in touch with the Kingsferry bridge operator. Never mind, we weighed anchor at 08:30 hrs and motored out of the Creek towards Queenborough.

Less than ten minutes later, there was an horrendous clunk! Clunk! noise from the engine which stopped dead and let out its pitiful beeeeeeeeeeep! What the hell was that?

We had snagged an underwater rope with the propeller. Quickly, we anchored and managed, with a knife taped to a long stick, to cut ourselves free from the rope which was evidently attached to the sea bed. Only one thing for it, now, sail back to TYC straight away.

Well, we had about six hours of tide to get us back to Thurrock. Should be enough. Did I say the tide was coming in? Did I say it was a brisk northerly? Three and a half hours later we managed to round the Nore Swatch. We had pulled ourselves from the grip of the Medway and were well on our way at last with 2-3 hrs of flood tide left. We stayed optimistic – God knows why. We were getting slower and slower as the ebb set in. We crawled past the Ovens and snailed past Diver and thought about Plan B.

I called London VTS to let them know our plight. Plan A was to stem the tide for another couple of hours and wait for the flood tide to begin at about 20:30 hrs. A PLA launch came by to see how we were. We were fine. Ok, they said, and shot off.

We got as far as Tilbury power station before we began to go backwards. The wind had dropped to about 6-7 knots and was due to reduce further. We were not going to make it. So, Plan B.

We spun “Us Two” through 180 degrees and, grasped by the heavily outgoing tide sped back towards the east. About 30 minutes later we were dabbling around in the shallows opposite London Gateway Port.

“Us Two, Us Two, this is London VTS” Blimey! We had been rumbled. “You are sailing beyond the drying line and strongly advise you turn north to find deeper water. Repeat, turn north!” How did they know? That’s a big telescope they have in Gravesend!

“London VTS, this is Us Two, we are going to anchor, wait for the tide to fall and then get off to inspect and hopefully clear the fouled prop. Then, head back to Thurrock on the following morning flood tide” - “Ok, then, that’s ok” They said. Kind.

Denis pointed out that we hadn’t eaten since 07:30 hrs and now it was 07:30 hrs, in the evening! So, while waiting for low water we had a very agreeable vegetable curry, a slice of fruit bread and a couple of glasses of Merlot. Things were looking up. Problem was, the water wasn’t going down. How deep was it? The boat hook read approximately one foot of water and two foot of mud. Oh dear…. I stripped off down to my undies and T-Shirt and attempted to exit the boat. I got that sinking feeling and gave up. I never did manage to even see the prop. Hang on, though, we’ve got a couple of voyeurs!

The PLA had been watching this all unfold from their launch a couple of hundred metres away in proper deep water. I expected them to call out or radio. Nothing. They came closer. Ha ha! We’re in 20 inches of water here, mate, you’ve got no chance! But they came closer still. And again until after about 45 minutes they were right next to us and practically on the bottom.

“Alright lads? How’s it going? Did you manage to clear the prop?” No, we said. Not a problem, we’ll sail back to Thurrock tomorrow. 6 hours of tide should help.

Those magical words. We hesitated for what seemed like 4 nanoseconds and gratefully accepted.

And that’s exactly what they did. Once we had manoeuvred out of the shallow stuff we were away at 8 knots. Poor “Us Two” – she’d never been that fast before. Must have been a bit of a shock.

So, at about 22:30 hrs the crew of the launch “Southwark”, with incredible skill, considering it packs 400 hp, picked their way through the moorings, brought us alongside and gently backed us onto my buoy.

I said “You like a challenge” “Oh, yes” they said “It’s even better in the dark” And with that they were off.

All in all, a great trip in retrospect (aren’t they all?) with lots of things learnt. I still haven’t been down the Swale! There’s always another day…

Handy tips: Always have a plan B and don’t be afraid of calling the PLA if you have a problem.