The Peoples Jubilee Pageant – My (Limited!) Part in its Success 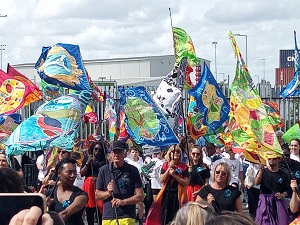 A few months ago I responded to the call from  Murray to be considered to represent the Club in the 75 year Jubilee celebrations for the Her Majesty the Queen’s reign. As I was no stranger to Royal Occasions – 1953 Coronation Street Party (age 2, still have the Certificate) AND 2007 visit to Ford at Dunton by HRH Prince Charles (still have photo of us shaking hands) – I was accepted.

It was quite an involved process to learn the “dance moves” required for the 5 routines when marching carrying a silk flag with the Club’s insignia. This was not helped by my 2 left feet, zero sense of rhythm and inability to distinguish left from right. Anyway, after 4 rehearsals, 2 Zoom coaching sessions and a full scale dress rehearsal I was as good as I was going to get at it!

The group I was in were from Tilbury, Grays and Purfleet (on Thames!). A really nice mix of people – mainly from the caring professions. On the day of the Jubilee Pageant we were taken by boat from Tilbury Landing stage up to Embankment Pier. A very enjoyable journey. I kept some fellow passengers entertained by pointing out the various riverside features – they seemed surprised at how much about the river I knew – I explained that any other members of the Yacht Club would be equally familiar due to their sailing on the river.

On arrival in London we went to Somerset House where we changed into our costumes and had lunch before a final rehearsal. We marched with the other displays that you would have seen on the television. The crowd were great! Our group was the last in the parade and I was in the last row. My apologies to anyone who could not spot me on the TV. My guest (Amanda, my wife) had a grandstand seat opposite the royal box and a “goodie” bag from Fortnum and Mason’s. She repaid me for this by failing to take a single photo of me! (she said the camera jammed.....)

After the parade was over we returned to Tilbury. I dropped into the Club where Clare generously stood me a beer (or two!).

My foray into the world of show business was not yet over. On the 25 th June as part of the T100 Celebrations a repeat by the Tilbury, Grays and Purfleet “marching massive” was made around Tilbury -  from the Civic Centre – finishing at the Cruise Terminal/Tilbury Riverside. This was a bit more low key – but in my opinion equally enjoyable. My wife had arranged to drop me off and leave, however there was a shortage of flag bearers and she was co-opted to join the procession. Once again a really nice crowd – both on the parade route through Tilbury and at the Terminal/Tilbury Riverside building. This time I was front and centre of the flag bearers!! I was also wearing a TYC 75 year Platinum Jubilee Polo shirt. After the parade had ended we were treated to a glass or two of Prosecco and a burger.

Throughout both occasions I made a point of describing the Club to interested parties and suggesting that they pop in on a Club night and introduce themselves.

I had a great time and would like to thank the Commodore, Secretary and Committee for allowing me this honour. 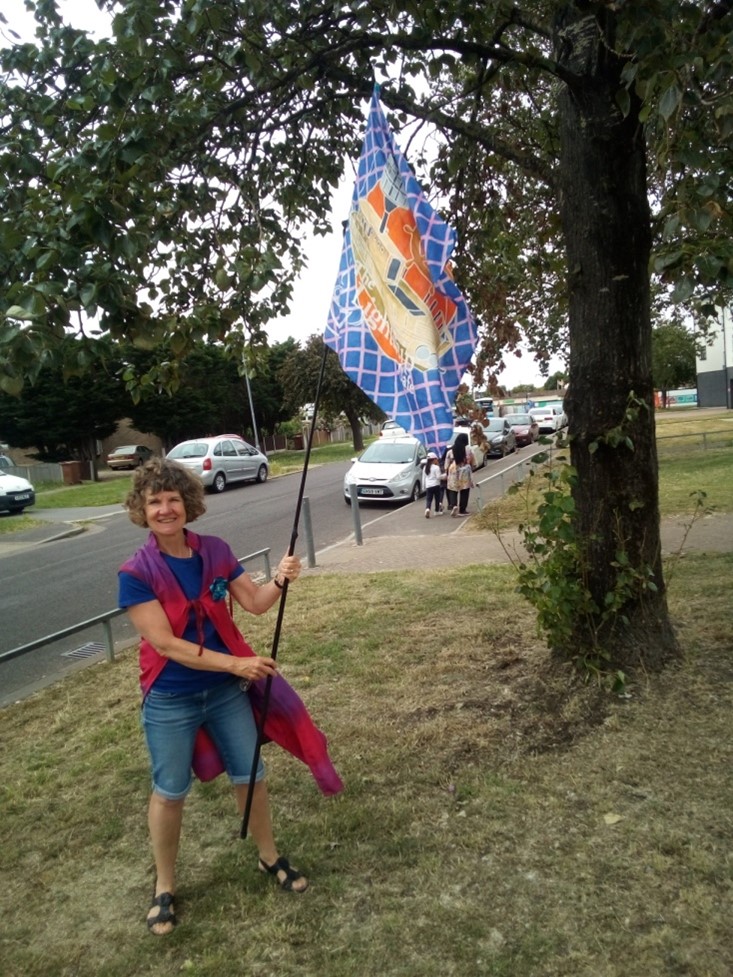