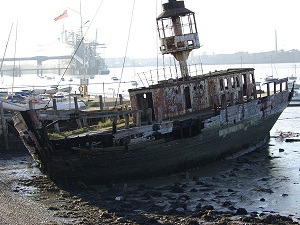 Our club occupies a prominent heritage position on the Grays waterfront and we continue a long and proud legacy of sailing and recreational activities on the Thames.

The club was initially formed in 1946 and has been active ever since.

However our roots go back further than that. The wharf that houses our club was first built around 1730, probably to break the monopoly that had previously been held by the neighbouring medieval manorial wharf (now known as the Grays Town Wharf). Originally called the "Stone Wharf" it was subsequently renamed the "Coal Wharf", and then "Seabrookes Wharf" (after the brewery that overlooked the site). It was finally named Kilvert's Wharf after Kliverts Lard Refiners who operated a factory on the site in the 1920s.

In the 19th century Grays was a major centre for commercial shipping, with the country's largest fleet of Thames Barges being operated by local company Goldsmiths of Grays. Racing was a key fixture in the life of Thames Barges and Goldsmiths operated a number of ships  designed primarily with racing in mind.

World War 2 saw the effective end of commercial operations for Thames sailing barges, but immediately after the war, our club was formed and we took occupancy of the moorings previously utilised by the barges and training ships.

The most recent clubhouse was completed in 1973 and was built and fitted out by club members, a commitment to DIY and volunteering that is still evident to this day.

Previously the clubhouse had been an 19th century lightship named "The Gull". Photographs and drawings around the club show this heritage. Sadly The Gull fell into a state of uneconomic repair and her remains can still be seen on to the west of the club.. The light mast though was saved and is now found in pride of place at the top of our slipway and can be seen on the approach to the club.